For active travelers: Fishing and Hiking in the Azores The Azores are becoming a popular destination for active travelers, with opportunities to experience big game fishing, hiking, whale-watching, bullfighting and world-class golf.

Catch your dinner with saltwater fly-fishing

The waters surrounding the Azores boast a veritable feast of fish and shark. Fish include the Atlantic Blue Marlin, White Marlin, Yellowfin, Big Eye Tuna, Swordfish, Blue Fish, Wahoo and Dorado, while shark species include Hammerheads, Six Gill and Mako. But the Blue Marlin hold a special place of honor--6 out of 10 fishing competition world records were set in the Azores, with the fishers in question catching impressively-sized Blue Marlin. The largest ever caught was 1,189 pounds! White Marlin are also abundant, averaging 65 pounds.

Over the years, saltwater fly-fishing has been gaining in popularity in the Azores as it continues to catch on worldwide.  The combination of mellow weather conditions in the summer and an abundant supply of good-sized White Marlin make the Azorean waters make for an ideal fly-fishing experience. 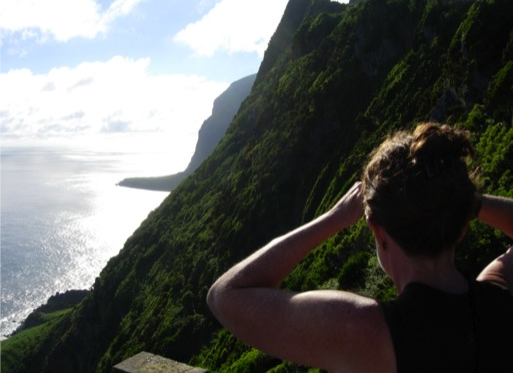 Credits: Brett St. Clair
On the island of Faial, the remains of a lighthouse mark the site of a massive volcanic eruption that took place in 1957, gutting the lighthouse, burying a small village and adding more than one mile of new shoreline to the island over the course of a year. Today the area is a nature park, with a hiking trail to the rim of the dormant volcano.

Meanwhile, the island of Pico (which means “peak” in English) is the highest point in Portugal at 7,700 feet and also sits atop volcanic terrain.  The peak can be seen from surrounding islands on clear days, with its lava cone rising above the massive volcano. The climb up to the summit takes about 3 hours, and the views are well worth the effort. It is, by the way, taller than Mt. Washington.

Lava caves run for miles under the islands of Pico, Terceira, Graciosa and São Miguel. These tube-like caves were created by the cooling lava of past eruptions, but today they provide great adventure for a spelunker.

Plus, geysers spout in nature parks on several of the islands. At the shore of Furnas Lake on the island of São Miguel, steam hisses out of a dozen geysers, offering a natural “oven” to cook food inside the caldeiras.

1. Povoacão to Nordeste, São Miguel Island  - This 11-mile hike passes through forests and small villages, with breathtaking views of the flower-covered hills. And if you’re lucky, you might catch a glimpse of the, Priôlo (Pyrrhula murina) - only indigenous to São Miguel.

2. Pico Mountain, Pico Island - A hike up Pico Mountain, nearly a mile above the Atlantic Ocean, provides a great way to see the other islands that make up the Azores. Hikers will see craters and flower-covered slopes along their trek, which is strenuous, but not a technically difficult climb.  Hikers must be accompanied by a registered mountain guide.

3. West Coast Walk, Flores Island - This 10-mile coastline hike can be done in one day for the super adventurous, or spread out over two days for the more leisurely trekker. Steep ascents and descents take you from cobbled paths to grass, to dirt pathways that cover the rolling coastline of Flores.  A river crossing and boulder hopping make this hike an all-terrain adventure!