A first‑generation American born to Portuguese parents, acclaimed chef and cookbook author George Mendes brought elevated Portuguese cooking to New York City when he opened his first restaurant, Aldea, in 2009. After graduating from the Culinary Institute of America in 1992, Mendes spent 17 years honing his knowledge, technique, and style under the guidance of some of the world’s greatest culinary masters including Alain Passard, Martín Berasategui, Roger Vergé, Alain Ducasse, and his most influential mentor, David Bouley. At Aldea, Mendes serves a menu of refined Portuguese-inspired dishes reflective of his classic training, Iberian experiences, and the flavors of his heritage—earning the restaurant a one-star rating from the Michelin Guide every year since 2010.

Mendes has been named a “Best New Chef” by Food & Wine magazine, and his first cookbook, My Portugal, was published in October 2014 to critical acclaim. He has made numerous television appearances, including on NBC's "TODAY Show," CBS's "This Morning," and Bravo's "Top Chef Masters." When not in chef whites, Mendes enjoys running, fly fishing, and cooking simple and wholesome meals at home.

TAP introduced “Taste the Stars” for Business Class passengers one year ago, offering a selection from one of the award-winning chefs as a choice from their inflight meal selections to promote the best of Portuguese cuisine around the world.  Passengers from New York’s John F Kennedy International Airport will enjoy a selection from George Mendes on their way to Lisbon (including his signature dishes such as Potato and Collard Green Soup; Cod with Potatoes, Onion, Tomato and Black Olives; and Pastel de Nata).

“I picked the three dishes because they epitomize the traditional flavors and aromas of Portuguese cuisine, as well as my Portuguese heritage. Growing up, for example, I polished off bowls of the Potato and Collard Greens Soup at my aunt Natalia’s place every Christmas. It defines the culture and the people of Portugal: warm, soulful, and easy to love.”

TAP investor David Neeleman believes this agreement with the Chefs “will allow more people to discover the excellence of Portuguese cuisine and fall in love with the country’s aromas and scents, sunshine and sea, wines and cuisine and, of course, its culture.”

As part of the “Taste The Stars” project, TAP offers a platform to promote young talents trained by the Chefs, who will also be given the opportunity to present their creations as part of the new inflight service.

The Michelin chefs’ restaurants in Portugal are also part of TAP’s “Portugal Stopover” program, offering free bottles of wine for Stopover travelers visiting Lisbon or Porto, while en route to destinations throughout Europe and Africa.

Biographies of the original Taste the Stars chefs are below: 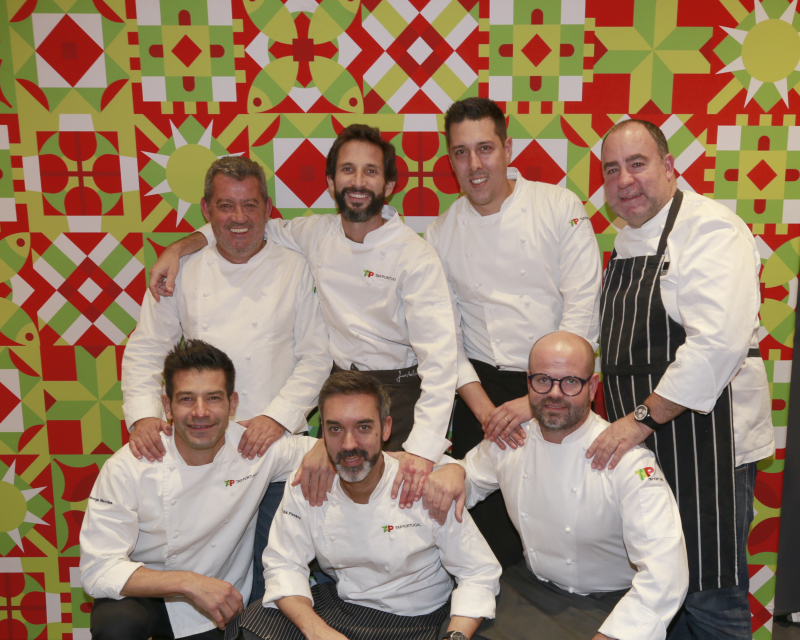 At “Belcanto”, Chef Avillez was awarded two Michelin stars and considered one of the ‘Best 100 Restaurants in the World’ by the renowned "The World's 50 Best Restaurants List." José Avillez offers revisited Portuguese cuisine in a sophisticated atmosphere that still keeps a certain romance from the old Chiado. This is the type of cooking that truly identifies him and that expresses his creative evolution.

His strength, determination and professionalism became clear when, at 29 years old, he was awarded his first Michelin star, for the restaurant “Bon Bon”, in Carvoeiro, Algarve.  While his  gastronomic style is based on French technique, he boldly transforms improbable connections in exciting and tasty dishes. He believes that local products, carefully selected, make the difference in each of his dishes which, together with his art, are truly memorable.

He works on his cooking in a very personal way. In love with Asian flavors, he mixes them with Portuguese flavors in unique ways. Miguel Laffan has been developing his cooking, creating a unique language in Alentejo, at L’AND Vineyards Wine Resort since 2011.

To Henrique Sá Pessoa, there is only good cooking and bad cooking. He defines his as “taste cuisine”:  with refined tastes, perfect techniques and excellent product. His gastronomic philosophy is in his influences and references: the travels around the world, his passion for Asia, the knowledge of traditional Portuguese cuisine, and life in Lisbon.

Rui Paula, won his first Michelin star at his restaurant ‘Casa de Chá da Boa Nova’, by the sea in a building signed by the architect Siza Vieira, in Leça da Palmeira. Chef Paul’s many years as Chef and the great work by his team in world renowned restaurants. All comes be bear as Casa de Cha for the best culinary experience.

For more information about the Chefs: https://youtu.be/xXJoeHEzgM8