A new hotel in Lisbon, O Artista, celebrates a former owner, the great Vasco Santana. A household name - Vasco Santana was a legend of the stage and screen. Born in Benfica in Lisbon in 1898, Vasco Santana remains a beloved star more than a half century after his death. He was a brilliant actor and comedian. His presence in films launched the romantic comedy in Portugal, and the Golden Age of Portuguese film. 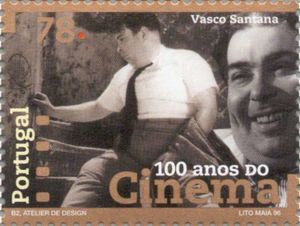 At age 19, he made his first theatrical debut and soon became a star in musical reviews. Then in 1933 he stared in the first Portuguese musical comedy, Canção de Lisboa. The film was a hit, and led to many other classics including Pai Tirano in 1941, and Pátio das Cantigas, in 1942. His many films introduced phrases and images into the collective memory of Portugal that remain poignant today. Canção de Lisboa gave us "Chapéus há muitos!" as he trys to get back his hat at the Lisbon Zoo. And his touching version of the Fado do Estudante.

Pátio das Cantigas is considered one of the greatest Portuguese films of the era, and gave us the memorable scene of Santana and the lamp post. It also offered the hilarious scene of Santana finding a wine stream. And, we can't forget the great catch phrase "Ó Evaristo tens cá disto?" with the talented Antonio Silva.