Home Archives Subscribe Meet the team
What’s next in Portugal? We will tell you!
How do I pick a place to eat in Portugal?

According to Diário de Notícias the ruined house that inspired "Santa Maria de Craquede" in Eça de Queiroz's Illustrious House of Ramires is for sale. The  Torre da Lagariça was built as a military tower as Portugal was emerging as a nation in the 12th century. By the the seventeenth century an L-shaped house was added on, not altering the old tower.

The writer Eça de Queirós visited the house in the village of São Cipriano, in Resende, and was inspired to write The Illustrious House of Ramires, which was published in 1901. "And as the viscount [of Rio-Manso] alluded to the desire, already in the old part of it, to look closely at the famous tower, older than Portugal - they both went down to the orchard. The viscount, with the parasol on his shoulder, was silent in the tower."

The ruined Torre da Lagariça offers 700 square meters of space, with 20 rooms. The farm is 60 thousand square meters and, besides the house, there is an orchard, gardens and  forest.

The Illustrious House of Ramires  was the final novel written by Eça de Queiro and was published posthumously. It is a satirical look at the existential state of Portuguese society on the brink of a modern age.

The ending of the book is one of the most memorable in Portuguese literature: 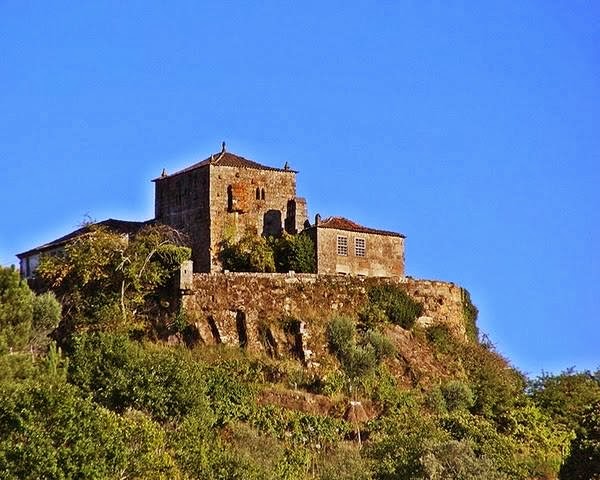 I have studied our friend Gonçalo Mendes a great deal. And, do you know,  Padre Soeiro, whom he reminds me of?

Maybe you will laugh.... But I hold there is a resemblance. All that of Gonçalo, the candor, the sweetness, the kindness, the immense kindness, which Padre Soeiro has noticed ... The hot flashes of enthusiasm, which soon end in smoke, and together with his persistence, his generosity, his sloppiness, his constant misunderstanding of business, and waves of great honor, scruples, almost childish, are not they? ... The imagination that always leads him to exaggerate to the point of a lie, and at the same time - a practical spirit, always attentive to a useful reality. The hope, constant faith in a miracle, in the old miracle of Ourique, that will wash away all difficulties ... Vanity, the taste for being right, of shining, and such a great simplicity... the he will offer an arm to a beggar in the street ... A well of melancholy, although so kind, so sociable. The terrible uncertainty of himself, which cows him, shrinks him, until one day he makes up his mind, and a hero appears, who destroys everything ... Even that antiquity of race - here attached to his old Tower from a thousand years ago. Even that new start in Africa ... So all complete, with good, with bad, do you know who he reminds me of ?

The three friends returned to Vila-Clara. In the white sky a little twinkle on Santa Maria de Craquede. And Padre Soeiro, with his parasol under his arm, slowly gathered himself in the quiet sweetness of the afternoon, praying his Hail Marys, and asking the peace of God for Gonçalo, for all humans, for fields and sleeping villages, and for the beautiful land of Portugal, so full of amorous grace, that it has always been blessed among lands.