Home Archives Subscribe Meet the team
TAP Air Portugal takes delivery of the world’s first wide body A330neo
Can I get by with Spanish in Portugal?

One of the most popular songs to ever come out of Portugal got renamed, and it is a bit insulting. It started as a 1937 musical review tune by Raul Portela and  José Galhardo - the team behind "Coimbra" and "Lisboa não sejas francesa." The song was a fado/march. But when Amália Rodrigues recorded it in the 1950's the unique melody caught on.

But when an American heard it in Mexico, and suggested it to the great Nelson Riddle - the song was rerecorded as an instrumental hit that spent a month at the top of the Billboard chart in 1956. Sadly, the song was called Lisbon Antigua - the word for old in Spanish. And, the name stuck, and the song was included in a 1956 film called Lisbon, the first American movie shot in Portugal.

The song went on to sell a lot of records, but most listeners never got the lyrics, which went like this:

Lisbon, old city
Full of charm and beauty!
Always smiling and so lovely
And dressed always so airy
The white veil of saudade
Cover your face, beautiful princess!
Look, gentlemen, this the Lisbon of other eras
Of the five kings, the esperas and the royal bullfights!
From the feasts, from the secular processions,
Of the popular morning street seller that will never return! 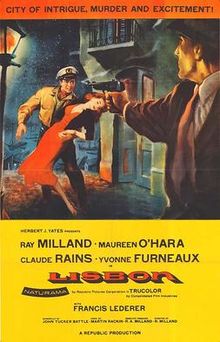