Discover the Heartland of Portugal: The hidden province of the Ribatejo

Can you name the province with the best farmland in Portugal, with wide riverbanks, very good wines and magnificent bread? This is also bull and horse country, and the only Portuguese traditional province that does not touch the Atlantic or Spain… Where are we?

The Ribatejo – Portugal’s heartland – was home to Romans, Moors, and Templars – all drawn to the rich agricultural lands along the banks of the mighty Tejo River. This is also horse and bull country – with numerous horse farms – and big horse fairs. It is a treat to explore, from ancient cities, big events, to some of the best cuisine in all of Portugal.

Officially created as a province in 1936, the Ribatejo follows Tejo River, connecting Lisbon, the Beiras and the Alentejo. The city of Santarém is the biggest in the region, followed by Tomar, Abrantes, Entroncamento, Cartaxo, and Almeirim.

The Ribatejo is the agricultural heartland of Portugal, with a huge variety of crops being grown: Grapes, corn, rice, wheat, tomato, sugar beets melons and olives.

As a result, local food is pretty spectacular - The Ribatejo Branco Melon is a medium-sized melon that is quite sweet and fragrant. When they are in season, roadside stands abound – and folks come from all over seeking them. The Ribatejo offers, in its cuisine, wonderful typical dishes such as sopa da pedra (stone soup).

Try the river eels, eaten fried or stewed, açorda (bread stew), best in spring when the fish spawn, and the rich roasts.

Ribatejano wheat bread, called Saloio Ribatejano, is crusty and soft mass – and is quite fluffy. It has quite a following. 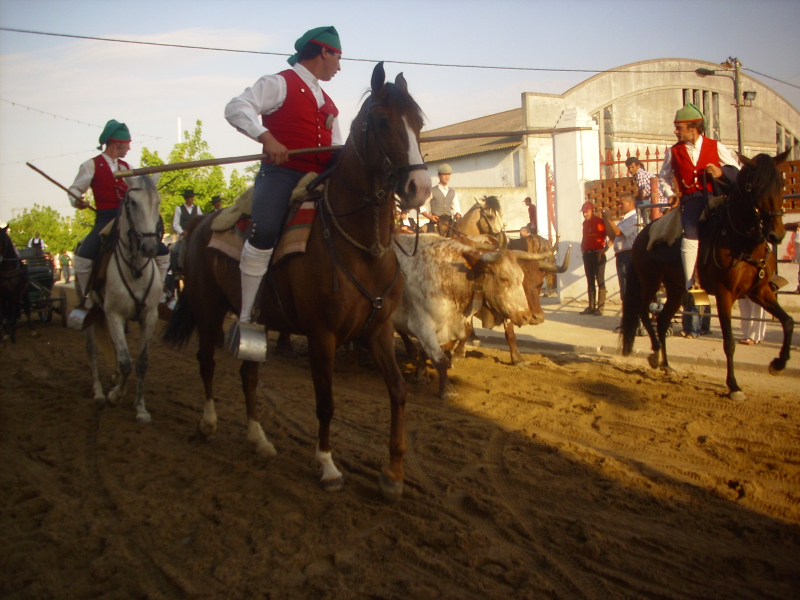 And, then there are the local wines, the most famousof which is from the Cartaxo Region. Since 1954, the Cartaxo Wine Coop has won 176 national and international awards over the last 3 years. The Cartaxo Festa do Vinho is an annual event held in Cartaxo, the self-proclaimed local Capital of the wine. Almeirim, Santarém, Chamusca and Coruche are the other producers of fine Ribatejo Wines.

On the lezírias (from the Arab al-jazira or "the island") the fertile banks of the River Tejo, horses run, and crops grow. Iberian fighting bull graze. This is the home of the beautiful horses called the Lusitano. Native to Portugal, the Lusitano breed is famed for its character and courage in both the bullring and in war. Majestic and smart, the Lusitano has made a name of itself in dressage, too.

The Ribatejo lezírias are also home to the campino, the local cowboys who ride with the horses. With a red vest and a green cap, the campinos challenge each other with typical fandango dances.

Campinos are known for their distinctive dress, which is made up of a green and red stocking cap with tassel, white shirt, red vest, short dark trousers and white stockings. They ride the plains, and are part of the bullfights. This is campino country.

The Companhia das Lezírias (Lezírias Company) is a state-run agriculture and forestry company in the town Benavente, started by the Portuguese Crown in the 19th century. Today, the company produces rice, wine, cork, and livestock, as well as being a respected horse breeder and organizer of big equestrian events.

Located in the heart of the fertile Ribatejo countryside, high above the Tejo River, Santarém is a city of both great food and monuments. Back in 1981 the first National Culinary Festival was held here. Each fall, Santarém hosts some of the best restaurants in Portugal, who serve up traditional specialties of their region. It is like traveling the whole country in one place. Set high above the pains of the Ribatejo, Santarém is a gem undiscovered by many visitors to Portugal. The Romanesque Church of São João do Alporão is now an Art and Archaeology Museum. The city, still in its walls in places, is called the Portuguese Gothic-Capital for its abundance of Gothic architecture. It is a city of squares, parks, and vistas.

Not far away, Golegã is the heart of horse country. Top horse breeders are scattered around the town. Since the eighteenth century, the Feira da Golegã, also called the Feira de S. Martinho, has been the National Horse Fair. Here the finest purebreds are shown. And to complement the event, there is lot of great food, wine and roasted chestnuts.