The holidays are a magical time of the year on the streets of Funchal Madeira (Portugal) as the city by the sea gets beautifully ‘dressed up’ with thousands of lights in numerous colors. During this time, the roads outside Funchal also put on their holiday dress, as almost all the lamp posts are connected with a light chain, giving the impression of a lit road map when looked at from above. All this with temperatures in the 70s and lots of sun!

This is a special time for Madeira as traditions are cherished. December is the month of the 'Festa', as the locals call it. In addition to the dedication with which they decorate their homes with the traditional "lapinhas" (cribs) and with flowers of the season, it is common to make holiday delicacies, such as honey biscuits, liqueurs, or pork marinated in wine and garlic.

Before Christmas Day there are  masses, followed by parties. People sing and share seasonal delicacies while singing Christmas Carols.

On the night of December 23rd, also known as "Market Night," people go to the Farmers' Market in Funchal (Mercado dos Lavradores), for last minute holiday shopping and Christmas carols. Anryone can participate, but get there early! And, now there are holiday market nights at Estreito de Câmara de Lobos, Santa Cruz, Machico, and Ribeira Brava, among others. 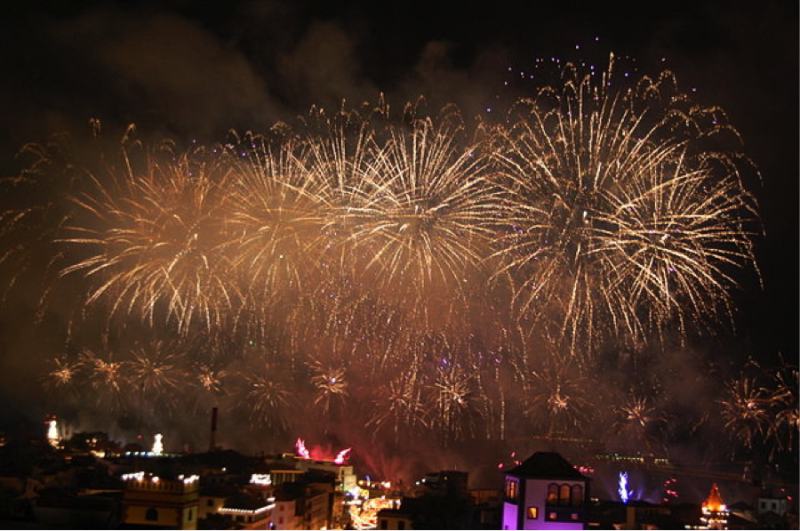 These festivities come to and end on New Year's Eve, with a spectacular fireworks show, which put Madeira in the Guinness book of records as the largest show in the world! It is truly an unforgettable moment, seen from the sea or by land, and the most incredible way to leave the old year behind and embrace the New Year with lots of color, joy and hope! This should be the longest night in Madeira, with people celebrating the New Year until the wee hours of the next day.

The magnificent holiday light decorations all over Funchal, together with the fantastic New Year’s Eve fireworks and activities make Madeira one of the most attractive New Years destinations, and one ou will want to  to experience over and over again.