Madeira, Portugal --The Atlantic archipelago of Madeira was named the ‘World’s Best Emerging Golf Destination 2019’ in the World Golf Awards.

With three courses by designers – Severiano Ballesteros, Cabell B Robinson, and Robert Trent Jones Sr. – Madeira, an autonomous region of Portugal, has seen golf tourism grow in recent years, as it is a year-round golf destination.

Now, besting Paris, Porto, Missouri and Sicily to win the title, Madeira’s mild climate and volcanic scenery has made it the world’s best emerging place to play golf. 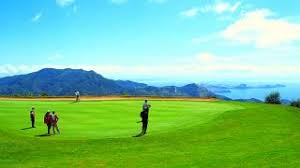 Marta Henrique said: “We are naturally delighted to win this award, not least because of the standard of the other nominees. We are engaged in a comprehensive marketing campaign to highlight the delights of Madeira golf, which is reaping benefits in terms of increased visitor numbers and growth in interest from the travel industry.

“Many of those industry visitors and travelling golfers will be among the voters in these awards and we thank them for their support, and, crucially their patronage of golf in Madeira, which has been vastly underrated for some time.”

The best way to enjoy the three golf courses is with a Madeira Golf Passport – available at most hotels and the golf clubs – which includes five rounds of golf across the two ‘mainland’ courses.

Trent Jones Sr.’s 1991 redesign of Santo da Serra– which dates from 1937 – created a spectacular 27-hole course set in a natural landscape, with views of Porto Santo Island and the Bay of Machico, where Portuguese ships first landed in 1419.

The Machico and Desertas nines form the 6,825-yard championship course, which hosted the European Tour’s Madeira Islands Open 10 times – and saw Mark James winning the inaugural 1993 tournament. The third and fourth holes on the Machico are regarded as the course signature, sitting atop cliffs more than 2,200 ft. above the Atlantic.

The 3,193-yard Serras course offers a delightful alternative, with lakes and mountain views along with flatter terrain.

The Robinson-designed Palheiro Golfopened in 1993 and sits within the magnificent Palheiro Estate, which is more than 200 years old. The course borders the five-star Hotel Casa Velha do Palheiro and meanders through a rare environment of maritime pine and botanical woodland, garnished with lush, sub-tropical vegetation.