Home Archives Subscribe Meet the team
So you want to be Portuguese: Take the "official" citizenship quiz and see if you pass!
Portugal Breaks the 1 Million Americans Visitor Record

Camões’ tomb is empty. The myth of “the Age of Discovery.”

Camões’ tomb is empty. Portugal’s great poet does have a couple of monumental tombs, but his remains are in neither. For years I wondered if his ghost walked the world in a shadow of sadness- simply reminding today’s Portuguese of a legacy they could never live up to. 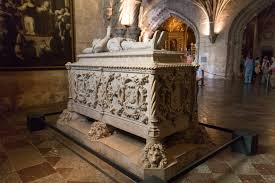 If you grew up Portuguese, then you probably suffered from the following thought at some point: "Wow, Portugal was once a mighty empire, with a footprint on four continents."  You probably had pangs of nostalgia and a mix of pride and yearning. “If there had been more lands to discover, they would have been there too.”

But, as an adult with kids, and after a lot of soul searching I have come to the conclusion that we are the victims of a long past propaganda campaign. And it is time to come to terms with the truth.

Back to the 1930’s a military-led Portuguese government was enthroned, and set to rebuild the nation in the midst of a Depression, a brewing world war, and wide-spread poverty.

They were not the first (or the last) to dig into the past and give history a makeover. The goal of the dictatorship was three fold: Raise nationalism, defend the right to hold colonial possessions, and prop up their own legitimacy.

The myth of “the Age of Discovery” was launched. Or some called it "Overseas Expansion." Now let me say that what Portugal did in the 15th and 16th centuries was nothing short of incredible. A small, poor and backwards nation with fewer than 1.4 million people built an ocean-born commercial empire unlike anything ever seen before. With new navigational tools, borrowed from Muslims and Jews, radical new ship designs – and the mighty breach-loading cannon – Portugal planted a trading empire from Africa to Brazil to India to China.

But the propagandists remade the Portuguese Renaissance as a "beacon of civilization" to distant and "backward" lands. But, in truth, Portugal 1478  had little to offer the far more advanced and prosperous lands of India.

Dias, da Gama, Albuquerque and others had amazing courage and faced impossible odds, but to achieve their goals, they were often brutal. Rather than present these men as complicated and human – the dictatorship made them gods, with massive statues. Larger than life, the fascists distorted the past and wallpapered over slavery, colonialism and racism with myth. No where did they speak of the millions of Africans forced into slavery in Brazil, or the brutal force it took to conquer the Indian Ocean, or how that legacy still lingers in Africa and Brazil today.

This happened with other European nations as well. But, in Portugal – once the dark night of fascism ended, the dictatorship was gone – but its propaganda remains. In fact, I often have to pause and explain to colleagues that calling Portugal’s golden age an “Age of Discovery” can come off as colonialism and racist.

A great example of how myths seep into modern history is on view for all to see in Lisbon. The Monument to the Discoveries was built for a "Fair of the Portuguese World"  that defended colonialism– showing the great generation of explorers striving to launch an empire. Happy tourists pose by the allegorical monument, erected by fascists to defend an empire that the world wanted them to disassemble.

My father served his nation for 3 years in Guinea. As a member of the Portuguese army, he spent the time in tanks. He had been told that the African colonies were overseas provinces – and he believed that until he disembarked in Bissau in 1963. Many natives in the interior did not speak much Portuguese, knew little of Portugal and he soon saw that he was more of a conqueror – than liberator. But, he had no choice – if he protested the secret police would have arrested him. He killed, so he would not be killed. And for his valor they gave him a war cross and two letters of merit. He left the army in 1966, and married my mother and moved to her hometown of Chicago. While he made lifelong friends in the war, he could never reconcile what he had done. He was not a man to admit his mistakes – but he deeply regretted what he had done in Africa.

I will be honest. I  admire Vasco da Gama and Afonso de Albuquerque. They did some pretty heavy stuff, but I see them as men, crafted by their times, driven by something I can only guess at. I enjoy Camões' great work; the Lusiadas with all its power and sadness.  But, for the propagandists and fascists of the 1940 and 50s, I have nothing but distain. They built a false narrative that linked navigational achievement to a tragic legacy. They turned men into gods, and spread lies.

The past in Portugal haunts us. I love an old Fado that seems to mock that feeling of failure, it said, “If there are heroes killing 10 or a thousand, who am I who has killed no one?” So, no: I will not be haunted by my personal failure to live up to an invented past. I won’t glorify imperialism. But that has a funny result – by accepting the truth – I am no less proud to be Portuguese.

I know Portugal has come a long way today. Antonio Costa is the nation’s first Prime Minster of Indian descent. A monument to slavery is planned for Lisbon.

As for the many god-like statues to the Explorer of the 15th and 16thcentury- I think they should remain. But it is time to explain them with the truth of what the empire became, how it changed the world, and what its legacy is today. Camões tomb is empty, DaGama was a man. Colonialism is wrong. And being in touch with the truth frees us offan invented and perverse past.