Once the hot destination with the founding fathers, and whose wine was the toast of a young republic - Madeira has a special relationship with America. Until recently, its key markets were Brits, with Americans only making up a small percentage of guests. But Brexit, and the growth of low-cost airlines has changed the European travel market-  and Madeira has changed too – courting American guests with new hotels, wild nature, and the best winter climate in Europe.

American numbers are rising, as are accolades in the US media. While the Azores made top lists for its breathtaking landscapes and proximity, Madeira offers a host of world class hotel-spas, and Michelin-star restaurants. But, new investments have shifted the focus to the wild and ancient volcanic island with its massive mountains, and famous for its wine.

And, with the growth of TAP across the US, including Chicago and San Francisco, getting there is easier that it has ever been. And, for Americans looking for a warm and sunny winter escape that is affable, beautiful and sophisticated, Madeira with its Carnaval, flowers, seafood, and glistening water has no where to go but up. This is because, summer, not winter is now the high season on Madeira - so going in February is affordable and easy.

Voted the “Leading Island Destination in Europe” by the World Travel Awards for the sixth time in a row, Madeira Island just marked the 600thAnniversary of its discovery with a spate of new hotels. Madeira is Europe, but set off the coast of North Africa, it is warm year-round and offers dramatic volcanic landscapes, world-class wines, incredible hiking, luxurious lodging and so much more. What’s hot? Madeira – read on!

The south coast is sunny, and home to estates growing bananas, sugar cane, and grapes. Quaint fishing towns rise off the coast, where small hotels and villas welcome guests. The east coast is home to the historic towns of Caniçal, Machico and Santa Cruz. The wild Ponta de São Lourenço Nature Reserve snakes out into the ocean with great hiking and impressive views. The north coast is rugged and rocky, featuring small towns and great surf. Santana is known for its straw roofed homes and lots of hiking trails to the islands peaks. Quaint São Vicente has a series of lava caves. Inland, the massive peaks of Pico Ruivo and Arieiro make for wild valleys and cliffs, with lots of grazing sheep and sweeping views. To the west lies the massive flat mountain plain of Paul da Serra, which looks like the surface of Mars, and the deep crater valley of Curral das Freiras. The sunny west coast runs from the tidal pools of Porto Moniz to the cliffs on the point at Cabo Girão.

Porto Santo, a sandy idyllic island off the coast of sub-tropical Madeira, is one of Europe’s best kept secrets. Golden sand beaches, deep blue waters, swaying palm trees and rugged volcanic sandstone landscapes await visitors looking for ultimate relaxation away from the crowds, with an extended season into the winter.

Madeira’s sandy little sister offers something for everyone, including festivals, family friendly activities, outdoors adventures and natural spa offerings. The island’s fine sands are renowned for having healing properties due to their rich mineral content and the organic combination of coral reefs and seashells are said to be good for bones and skin. Activities like paddle boarding, surfing, windsurfing, kite surfing, boat trips, hiking and off-road Jeep adventures are also available on the island.

The uninhabited Desertas and Selvagens Islands are southwest and south of Madeira. The Desertas Islands’ three small, volcanic islands are a nature reserve. They serve as the last refuge for the Mediterranean monk seal (Monachus monachus), the rarest seal in the world. Another 180 miles south of Madeira are the Selvagens Islands, two groups of small islands also serving as a rich nature reserve for some of the rarest plants on the planet. Ideal nesting conditions make the islands a perfect bird sanctuary. Boat trips can be booked in advance, as environmental laws limit visitor numbers.

The cuisine of Madeira can be summed up in one word: Unique. The sunny island is part of Portugal, but it is just a few hundred miles off the coast of Africa and soars from sea level to more than 5,000 feet, thus having a unique climate. Due to the abundance of sun and water almost anything seems to grow there. And there is also a variety of fishing in the waters surrounding the island.

One of Madeira’s most popular dishes, espada, is a fillet of scabbard fish traditionally served with fried banana or passion-fruit sauce. Speaking of passion-fruit, this is one of the many tropical fruits that you can eat in Madeira.

Another regional treat is milho frito, small cubes of fried corn flour that look similar to Italian polenta. This is typically a side dish for tuna steaksor espetada, a skewer made from beef seasoned with garlic and baby leaf, and marinated in Madeira wine before being grilled.

If you’re visiting the Ribeiro Frio region, you should try the trout dish, with fresh fish bred in the local trout farms.Adventurous seafood eaters can have lapas,limpets plucked from Madeira’s rocky shores and fried with garlic butter. Pair them with the local beer Coralfor a more authentic experience.

And if you’re craving something sweet, Madeira’s bolo de melwill not disappoint you. Traditionally made around Christmas but available year round, this ancient dark cake is made with molasses and often has mixed nuts.Bolo do cacois also unique to Madeira, but unlike the name suggests, this is not cake (bolo). It’s a typical flat bread that gets its shape from being baked on top of a hot stone. Bolo do caco can be eaten alone or as a main dish, with a thin slice of beef inside, called Prego.

And any trip to Madeira will be incomplete without Poncha, a traditional sweet and citrusy alcoholic drink made from rum. Not to mention Madeira wine, famous all around the world for its sophisticated and subtle sweetness.

Funchal: The vibrant capital of a warm escape

Funchal is a flowering city that rises from the Atlantic like an amphitheater. It boasts forts, a historic old town, well-preserved churches, inviting museums, and regionally crafted wines. It is a walkable city with a pleasant harbor and a medieval cathedral more than 500 years old. Funchal is also perpetually sunny, but when the sun goes down, it’s easy to find entertainment, fine cuisine and music in its nightclubs, restaurants, and casino.

The black cliffs surrounding Funchal are dotted with luxury hotels, such as the new Savoy Palace Hotel or The Cliff Bay Hotel. There is an art museum, wicker toboggan rides, wineries, an open market, seaside parks… and so much more.  The Lavradores Market features the colors, aromas, flowers, fruit and fish of Madeira. On the Rua de Santa Maria, a Painted Door Project has highlighted the oldest part of the city and its historic streets. Santiago Fort is the home to the Museum of Contemporary Art. And the Madeira Story Centre offers an interactive look at the archipelago.

A thrilling destination for adventure travelers

Hiking: Madeira is known for its unique levadas, which are canals with a pedestrian sidewalk, created to bring water from the mountains in the north to the southern drier areas. The island is considered by many to be a hikers paradise, due to its extensive offering of trails and peaks, with varying skill levels that often end in spectacular waterfalls and views. Top picks include:

Coasteering is a trendy way to explore Madeira's rocky shores. It involves rock climbing, cave exploring, cliff jumping, diving, swimming and snorkeling. Several companies are now offering these adrenaline-filled activities, starting in famous hiking spots like Ponta de Sao Lourenço, or in the south east coast near Baia d'Abra (Caniçal). These tours last between 3 and 4 hours and include 8 - 10 jumps. 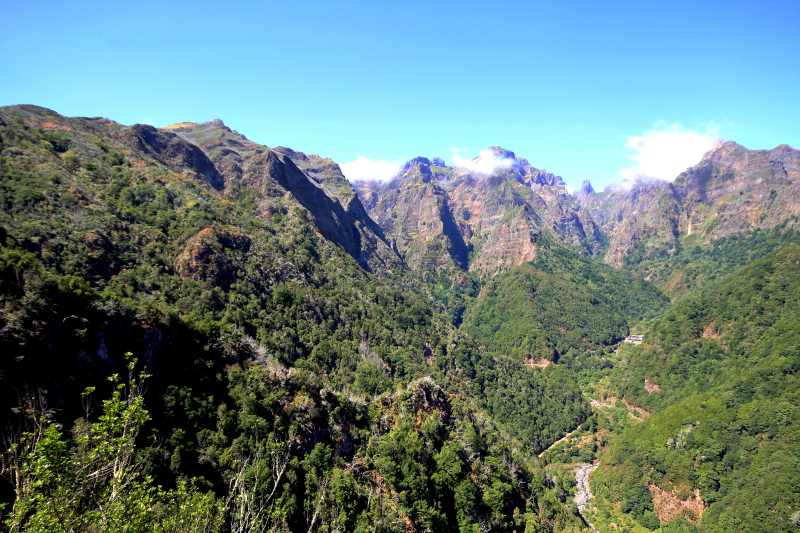 Jeep Tours are becoming more popular as they are a very complete and fun way to see the island. Often lasting the whole day, these tours include rides on a 4x4 all-terrain jeep through Madeira's scenic roads and several stops along the way for short walks in the levadas, swimming in natural pools and traditional food. The safari tours also take off the road paths to explore secret places hidden in the valleys and the mountains.

Whale and dolphin watching: Every year, over 20 species of whales and dolphins swim across the coast of Madeira, making the observation of these sea mammals a very popular activity. Several companies offer 2 to 3-hour guided boat tours around known marine life hotspots, and some tour operators even offer the more fearless visitors a chance to swim with dolphins. The best season for successful whale and dolphin watching runs from April to September, which is when more species visit Madeira’s seas.