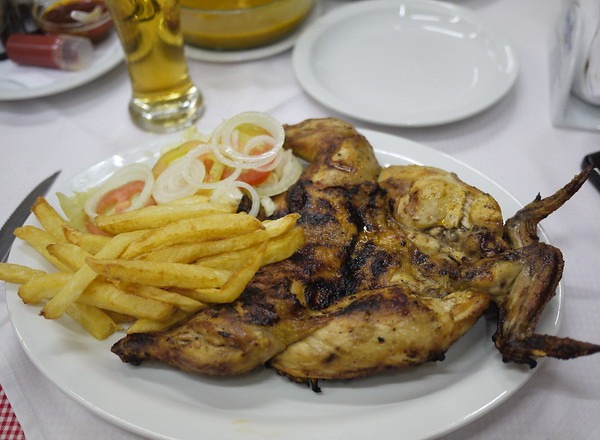 Well let’s start with the name – in Portugal look for grilled chicken “frango no churrasco”, and some say “frango com piri-piri” or “frango na brasa”. Like so many famous Portuguese recipes, its origin is overseas. In the 16th century the Portuguese took a liking to the piri-piri peppers native to Mozambique. This sauce found its way into the typical barbecue chicken recipe and became a delicious standard of Portuguese cuisine, served in grills, roadhouses and simple eateries. It always comes with a side of fried potatoes, and the piri-piri is either cooked in, or on the side, or both.

Piri-piri (or peri-peri, meaning “pepper”) is Portugal’s sriracha, and can be mild to very hot. Like the nata, which combines sugar from Brazil with cinnamon from Sri Lanka, this is an international dish that speaks to the Portuguese experience. But it is not seen as high cuisine, and it is looked upon more as fast food, Portuguese style. It is the go-to take out meal, whether it is dinner on Sunday night, a gathering of friends or a bite to eat while the soccer match is on.

Nando’s, which has become the word wide ambassador of the dish, is actually a South African chain founded by Portuguese immigrants.

So, where do you find this grilled delicacy? It is served all over Portugal. And some of our favorites include Casa dos Frangos in Póvoa de Varzim, Restaurante As Medas in Vila Nova de Poiares, Pedro dos Frangos in Porto, Churrasqueira da Várzea in Coimbra, Frango da Guiia in Funchal, Churrasqueira Dom Duarte in Leiria.

And, in Lisbon don't miss the local landmark Bom Jardim, the self proclaimed King of the Chickens, where the tasty dish has been grilled for decades.