Home Archives Subscribe Meet the team
Visit Madeira launches a social media campaign to appeal to all to stay home- Later, the destination of Madeira awaits everyone
Places to escape to in Portugal off the beaten path

Never kill the Mandarin: Choosing between wealth and life - A powerful tale for our times

A simple trade - the life of a man in a distant land for a vast fortune.

Eça de Queiroz was the master of social criticism, painting the weaknesses and failures of society with a vivid brush.  In his 1880 dark comedy, O Mandarim, he offers an allegory of a greedy society, exploring the balance between wealth and the value of a human life. It is a story that remains relevant. 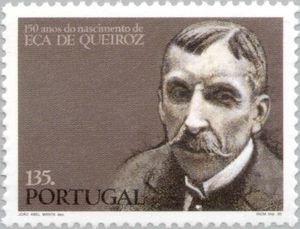 Teodoro, a penniless civil servant from Lisbon, has a visit from the Devil in disguise.  He is offered the opportunity to inherit a vast fortune if he just rings a bell placed on a book by his side, which will lead to the death of an elderly Mandarin in far off China.

"In deepest China there is a Mandarin richer than all the kings that legends or history recount. You know nothing about him; not a name, or the face, or the silk that he wears. For you to inherit his endless wealth, just ring that bell, placed beside you, on a book. He will only breathe a sigh, in far off Mongolia, then, he will be a corpse. And you will see at your feet more gold than the ambition of a miser could dream of. You, who are a mortal man, will you ring the bell?"

Teodoro rings the bell,  inheriting the Mandarin's vast fortune.  He spend as if the world were ending, but soon he finds that endless wealth brings with it an unexpected problem: Guilt. Unable to cope, Teodoro  goes to China to search for the dead Mandarin’s family to return the fortune. But to no avail. Haunted by his crime, he returns home. Teodoro attempts to give up the dark inheritance, failing every time. Near death, he ends the story by saying:

"I feel myself dying. I have my will written. In it I leave my millions to the Demon; they belong to him; may he claim them and share them ...

And to you, mankind, I just leave you, without comment, these words: 'The only bread that tastes good is the bread we earn day-by-day with our own hands: Never kill the Mandarin.'

And yet, at death’s door, this idea consoles me prodigiously: from North to South and West to East, from the Great Wall of Tartaria to the waves of the Yellow Sea, in the vast Chinese Empire, no Mandarin would remain alive, if you, as easily as I, could kill him and inherit his millions, dear reader, creature improvised by God, evil work of bad clay, my fellow man and my brother!"