Portugal was a neutral nation in World War II. But, as one of the only open and non-combatant cities in Europe during the war, the streets of Lisbon became the "The Capital of Espionage” In a spy-based proxy cold war. This fascinating chapter of the long history of Lisbon was the focus of Lisbon: War in the Shadows of the City of Light, 1939-1945 by Neill Lochery.

Lisbon had a forgotten role in World War II. It was the only European city in which the Allies and the Axis power could walk freely. Portugal had escaped the war, but the war still came to Portugal.  Many of Europe's deposed royalty fled here, as did an estimated million refugees seeking passage to the Brazil, Canada and The US. The city was crawling with spies, Portuguese secret police, business big-wigs, writers and artists, and smugglers. One agent joked that Lisbon airport felt like end of the film “Casablanca” everyday, only times twenty worse. 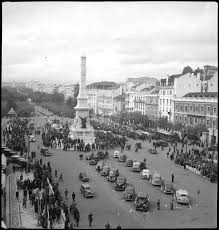 The top hotel lobbies were a meeting place for spies. The Nazis held court at the Hotel Avenida Palace in the Rossio. The British were just up the street at the Tivoli Avenida Liberdade.

Jews fleeing the Nazis came to Lisbon too, including more than 30,000 given visas by Aristides de Sousa Mendes, the Portuguese consul in Bordeaux, France. Included in the numbers were the husband-and-wife team of H.A. Rey and Margaret Rey, authors of Curious George.

Refugees marked the time in the cafés of the  Rossio Square. The Rossio (aka King Pedro IV Square) has been the heart of Lisbon since the 18th century — and in the 1940s it teamed with life. With the world at war, Lisbon was the rare free entry and exit point for refugees and spies — just this is where Rick was aiming to go in Casablanca.

Historian Neill Lochery painted the thrilling story of the war's backstage. His book explains how Portugal struggled to remain neutral and escape intrigue, plots, and dangers.  Portugal let the Allies use its Atlantic islands as bases, and sold wolfram to the Germans for gold.

Towards the sea, Estoril and its casino were popular with spies. Ian Fleming would base his  Bond novel, Casino Royale on it. The Hotel Palácio Estoril was a base the Allies, and the Hotel Atlântico served Nazis agents. Ian Fleming  was a young employee at the British Consulate. He would often stop at the Estoril Casino, as Estoril also became the destination for European aristocracy escaping from the war.