Home Archives Subscribe Meet the team
Ready to see more of Portugal? Here are some bucket list places for 2021
Best of: New Hotels in Portugal 2020

The Alentejo town of Redondois known around Portugal for hand-made pottery with bright floral themes and country life scenes. The clay in the region is resistant to heat, and so the colorful pottery of Redondo is prized and rugged. Redondo is also a DOC region, meaning that wines produced there are high quality and appreciated by many. With good wine and unique pottery, Redondo is worth a visit, not to mention its historic castle, and medieval fortifications.

Located just north of Lisbon, Caldas da Rainhais forever linked to Rafael Bordalo Pinheiro, a Lisbon-born artist who was named director of the city’s porcelain factory in 1884, starting a unique style of colorful dishware inspired by nature, shaped like cabbage, birds, fruits, etc. But the pottery tradition in clay-rich Caldas da Rainha goes beyond Bordalo. And when walking around the city you might come across local “satirical pottery” made by local artists which makes for a great souvenir.

Porcelain remains an important part of Coimbra’sculture and roots, with a unique style that reveals the 15thcentury Moorish influence in the intricate geometric designs, use of color and depictions of animals like deer, rabbits or peacocks. There is also some inspiration of Chinese porcelain brought back by Portuguese trade to the East around the 17thcentury, and these designs use mostly blue on a white background. Several traditional pottery studios can still be found around Coimbra’s Alta District.

This Northern city is famed for gold filigree and handkerchiefs with love poems, but ceramics from Viana do Casteloare also very unique and praised in Portugal. Traditional dishware and pieces are inspired by the 17thand 18thcentury and feature flowers, nautical and religious motifs, evoking the city’s historic port and fishing culture. Porcelain from Viana do Castelo is hand painted and baked at over 2,500 F, which makes it more resistant.

Like other Western Portuguese cities, the soils in Alcobaça are rich in clay and kaolin and pottery can be traced back to the monks living at the monumental gothic Monastery of Alcobaça.Typical porcelain from Alcobaça consists of hand painted white clay with strong colors like red, yellow, green and blue and simple drawings of fruit, plants and small animals. Some factories can be visited today and offer tours.

Pottery is one of the main activities of this small town located on Sao Miguel Island, in the tropical archipelago Azores. The history of porcelain from Lagoa can’t be separated from the Vieira factory, founded in 1862, where dishware and tiles are produced manually and painted mostly in dark blue. The designs are minimalistic; some featuring geometric shapes while others have plants and leaves. The traditional ceramics attract many visitors. 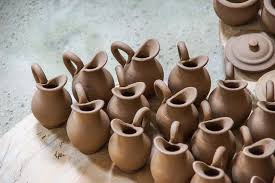