Hotel República opens in the heart of Tomar

Luxury, tradition and history - the new Hotel República has opened in the center of Tomar, Portugal. The five-star hotel just opened in the Praça da República. The new  Tomar hotel is an investment of two and a half million euros. The Hotel República has nineteen rooms, two of which are suites, and a restaurant called "Praça" that opens to a historic square. The hotel is flanked by a monumental church and medieval city hall. 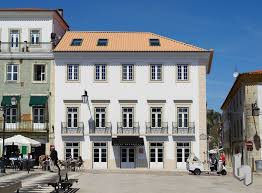 Tomar is a lovely city crowned by a huge castle that is a testament to the Knights Templars. The city below is well preserved with a 14th century synagogue and Jewish Museum, and a riverfront park with an Arab waterwheel.

This city of 40,000 people is less than 2 hours from Lisbon. It has rail service to Lisbon. It is monumental and charming.  The city has great eateries, is surrounded by parks, is set on a river and is one of the most monumental cities in Portugal.