Home Archives Subscribe Meet the team
What's new in the Alentejo?
Explore Rabaçal and a waterfall with 25 springs in this amazing hiking trail

Lisbon has seven hills, their are seven days a week, and today, Portugal has Seven Regions:

Lisbon: Thriving Lisbon is the “capital of cool.” Legend says the city was named for and founded by Ulysses more than 2,500 years ago, Greater Lisbon is home to 2 million people, to cathedrals, churches, museums, galleries and one of Europe’s “hottest” restaurant-fashion-nightlife scenes. Lisbon is vibrant, and a recent burst of new hotels, restaurants, nightclubs and museums have upped the stake for a city that has become the place to go Europe. A place where culture and ideas have blended for more than 2,000 years, Lisbon is colorful quilt of historic neighborhood and monuments, spiced with sounds of the Fado and the bells of yellow trollies. It is ringed by places rich in natural beauty, and The Lisbon region is also home to posh Atlantic resorts of Sintra and Cascais - royal towns in their own right.

Porto and the North:  Porto  is Portugal’s second largest city, famed as the port from which Portugal’s legendary Port wine is exported. A city of granite baroque splendor and modern grandeur, including the 2005 Casa de Musica, the futuristic concert hall, designed by Dutch master architect Rem Koolhaas. Porto is emerging as the cultural capital of Europe, mixing 1,000 years of architecture, a vibrant riverfront, with some of coolest new museums in Europe.  Porto is the gateway to a region that is rich in historic cities, including Braga, Amarante, and Bragança. The Atlantic city of Viana do Castelo is as if a stage-set has been created to depict the ideal 17th century town. This is where, in the 12th century Portugal began. The green mountains, farms, and river of the northwest are home to splendid Baroque towns, and manor houses offering lodging with history less.  Here, we find the monumental city of Guimarães, the nation’s first capitol and birthplace of it founder and first king, D. Afonso Henriques. To the south lies the great Douro river, on who meandering banks are grown the grapes that make Port wine. Porto is also the oldest demarcated wine in the world. The river meets the sea just past the city of Porto – Portugal’s second largest city. To the east, the Douro flows through soaring mountains until the sweeping hills and fields of the Portuguese northeast – This is a sprawling, natural place with small towns, ancient castles, and wild natural parks.

The Centro: The wild and romantic Centro region contains more contrasts; history and natural wonders than most entire countries.  From the colorful beach houses of Aveiro…to the majesty of baroque Coimbra…to the Roman remains of Conimbriga…to the Templar city of team, to the castles, fortresses and ancient Roman ruins of Belmonte and the interior. The heartland of Portugal is the Beiras. The coastal areas offer beaches and coastal lagoons. Here we find Coimbra, the home of the nation’s oldest university, Guarda, a city high in the Estrela Mountains. These mountains are rich in traditions, cuisine, and all sorts of sports, including snow sports in the winter. And Castelo Branco, overlooking the bolder strewn field of the center east. Small walled town, fine vineyards, soaring mountains, and fine sandy beaches all are typical of this, the heartland of Portugal. 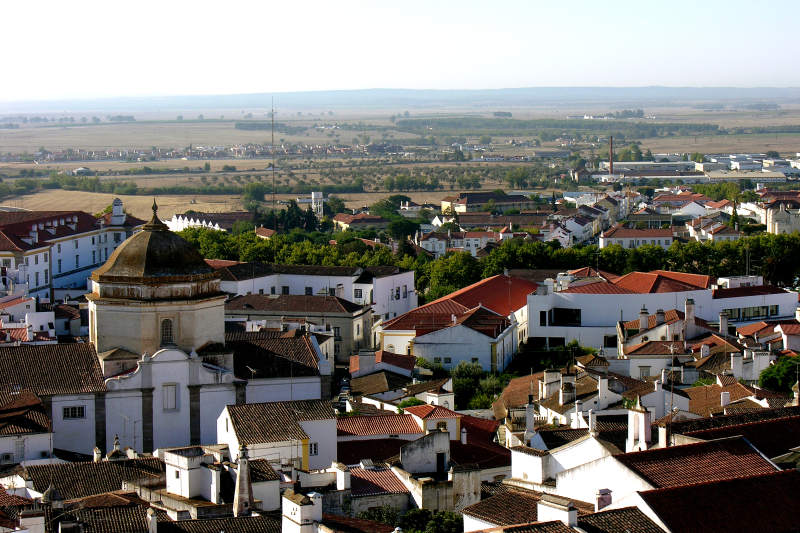 The Alentejo: The world's Cork Country -The fields of the Alentejo can appear purple at sunset, and the cork forests, and a field of sunflower and grapes are only occasional punctuated by a fortified hill town. Moors, Romans, Carthaginians and other great civilizations have been drawn to its natural beauty. Evora, the center of the Alentejo could be called a living museum. But, despite it Roman temple, Gothic cathedral, and ancient ramparts, Evora is a thriving place for of life, commerce, palatial hotels and a cuisine as rich as it past. Characterized as Portugal’s “hidden treasure,” Alentejo, like the Centro, is a wild and historic region that combines grand Roman and Moorish ruins, with medieval towns, whitewashed villages and baroque cities (such as Evora and Portalegre) with some of the most evocative natural scenery in Europe. Alentejo Atlantic coastline combines rocky coves and cliffs with some of Europe’s most idyllic and less-known beaches.

The Algarve:  In the very south of Portugal, the Algarve has some of the world’s finest golf courses, as are mile upon mile of magnificent beaches, picturesque villages, as well as an atmosphere of relaxation and hedonism.  History lives here too, in Faro, capital of the Algarve, founded in the 18th century – with many of its charming neighborhoods virtually unchanged in two centuries. The beaches on the outer islands of the Algarve are reached by boat in protected area, and are clean and open. The Algarve is all about two things, sun and sand. Sure, there are amazing waterfront golf course, great Atlantic finishing, except seafront vials, world class eateries, walled town, Roman remains, and vast marinas. But the beaches, and the climate has to be some of the best in Europe.

Madeira: The sunny island of Madeira lies in the Atlantic Ocean, 750 miles southwest of Lisbon.  This paradise has the perfect climate– always warm in winter, and never too warm in summer.  An island of flowers, wine, elegant resorts, fascinating villages and landscapes, Madeira, with its romantic capital of Funchal, has been a travelers’ favorite ever since its discovery in the 1420. Funchal is draped around a bay, and is always sunny. Its world-class hotels rise on black cliffs above the oceans. It casino, nightclubs, and resultants make any night an exciting one. By day the city's numerous botanical gardens not only have sweeping views over the bay, but show off species from around the world. The islands interior has six distinct climatic zones, all based on altitude. And Madeira is all about altitude. Its hiking trails that follow water channels, called levadas follow some of the most interesting hiking in Europe. They pass through waterfalls, and offer spectacular views. Porto Santo, nearby Madeira, is  much smaller and drier, but boasts  one of the best beaches in Portugal. Sandy, dry, and hilly, Porto Santo is relaxed and natural, without high-rises, or its ocean front is cover with dunes, and vineyards.

The Azores: In the middle of the Atlantic, more than half way between New York and Portugal are the Azores islands. A couple thousand miles east of New York City, and scattered over several hundred miles of ocean, the nine islands of the Azores are the closest point in Europe to the United States. That means that a direct flight from Boston takes a mere four hours to reach them. Thrust out of the seabed by massive volcanic activity millions of years ago, the Azores mark the spot that the European, American, and African tectonic plates meet. Because the islands were created over a millennium ago, each is different both topographically and in terms of vegetation. Because the once uninhabited islands were settled over two centuries, the culture, dialect, cuisine, and tradition of each island varies noticeably.  From Terceira town of Angra do Heroísmo, a UNESCO World Heritage Site, to the lakes, villages, beaches, quaint towns, historic churches, fishing harbors and museums of all nine islands, the Azores are considered by many travel specialists as one of the world’s most exciting destinations.