Home Archives Subscribe Meet the team
Rail in Portugal is worth the journey
Dark Sky, shining on Portugal, as Alqueva wins more recognition as an emerging destination

A Tour of the Windmills of the Azores

Today, we usually encounter windmills as giant machines on wind farms. But the quaint windmills of old were once important to life on most of the nine major islands of the Azores. And many survive today.

Windmills came to the Azores during Portuguese settlement during the 15th century. They were used to pump water and to perform various actions in support of local agriculture.

The Azores soon produced wheat for shipment to Portugal, and so windmills were at the heart of early trade.

It would be several centuries before the Assembleia dos Homens de Negócio (Assembly of Businessmen) was created - and this was the predecessor of the Lisbon Stock Exchange (Bolsa de Valores de Lisboa). So in a way, windmills were part of the evolution to stock markets and 21st-century digital platforms, where consumers trade from their mobile phones.

Over time, most windmills disappeared from the Azores. But many of the islands’ best windmills remain.

The people of the Azores didn’t create cookie-cutter style windmills. They customized the designs of their windmills according to their specific locations and needs, and this makes exploring them fascinating.

Here are some of the notable types of windmills found on the different islands of the Azores.

The islands of Faial and Pico have similarly designed windmills, but the windmills on Faial have been better preserved.

The Faial-style windmill has a cone-shaped, stone pedestal that serves as the base for its tower. The tower houses the windmill’s inner workings as well as a staircase to access them. The original Faial-style windmills caught wind with triangular sails made from cloth.

Many of them were built by Flemish colonists to mill grain. Today, the windmills are not operational and are only used for historical interest and tourism. Therestored windmills of this design can be viewed in the town of Horta. 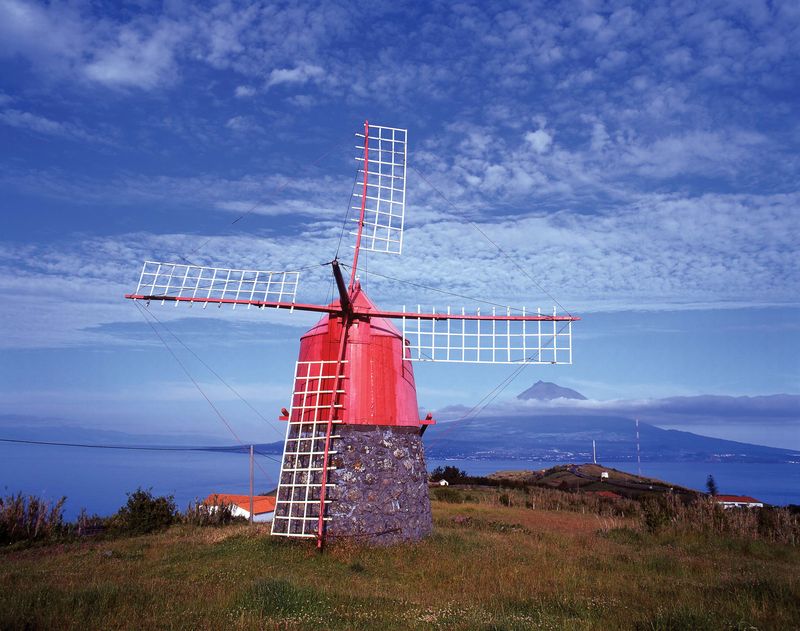 Like on Faial, the windmill of San Jorge has a stone conical shaped base. However, the tower is a taller, narrower wooden component that supports two or four cloth sails that act as propellers for the windmill.

A restored version of the Sao Jorge-style windmill without its cloth sails is found in the town of Cais da Urzelina. It’s available for touring only. Remnants of stone windmill pedestals are found throughout the island. Notable ones are also seen in Santo Antão and Norte Pequeno.

The windmill type has a cone-shaped stone base and a short, squat tower in the shape of a dome. The dome was designed to rotate to catch wind from different directions. This design feature, which is still in use in some of today’s wind turbines, also helped these old windmills to withstand harsh storms that brought catastrophic wind speeds.

While the historic windmills of São Miguel no longer help mills to grind grain, they aren’t all used for tours. Many of the windmills of the Azores are used for lodging. For example, a windmill in Arrifes was converted into a small shelter. Tourists can rent the windmill that has one bedroom, one bathroom, and a kitchenette when they visit São Miguel island. Since many windmills are situated on hills that offer breathtaking views of the islands and the surrounding ocean, this is not surprising.

The windmills of Corvo are some of the most distinctive of any in the Azores. The typical Corvo-style windmill has a cylinder-like base that’s made of stone and a cone-shaped, wooden rooftop that supports the windmill’s mast and corresponding poles for its cloth sails.

This windmill’s stone base is low to the ground, and its rooftop rotates. It has an exterior stone staircase that leads to the windmill’s only point of entry. Islanders usually enhanced the appearance of this type of windmill by applying white-washed plaster to the stone masonry at its base (as usual on the islands) and paint to its wooden rooftop.

There were seven windmills of this style on the island before the turn of the 20th century; only three remain today. The Corvo island government restored the historic windmills to preserve part of the island’s history and culture. Visitors can view these restored landmarks in Vila Do Corvo.

The Azores is known as Europe’s Hawaii, and it has a booming adventure travel tourism industry.

Touring the islands’ windmills to learn more about the important roles that they played historically is a perfect way to begin your time on the islands.