Home Archives Subscribe Meet the team
Literally Portugal: A nation with a poet’s soul
A Tour of the Windmills of the Azores

Rail in Portugal is worth the journey

All aboard! Much has been written about Portugal, but not so much about Portugal’s rail system. And that’s a shame. Rail is a great way to get around Portugal. It is fast and easy, with major rail hubs in Lisbon and Porto. In fact, Lisbon’s Oriente Station is just 10 minutes from the airport. Most stations are near downtown, and bigger cities have connections from downtown terminals to bigger stations on the main line, as in Coimbra, Porto and Lisbon. 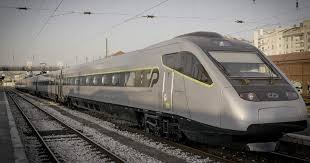 Here is what you need to know about the rail services:

- Alfa Pendular –offers fast rail from Braga to Porto to Lisbon then to the Algarve and back.  With speeds up to 160 miles per hour, these sleek trains offer business and first class, wifi and a dining car.

- Overnight service from Lisbon includes the Sud-Express train to Spain and France, the Lusitânia hotel-train to Madrid, as well as the Celta from Porto to Vigo (Spain).

- There is a vast network of regional, inter-regional and commuter trains covering the whole country and major cities.

Get a rail pass, and enjoy the scenery:

The Portugal Rail Pass is an easy way to explore Portugal by train.

It gives you unlimited travel for three or seven days over a month from the date of purchase.

CP’s historic train runs along the bank of the Douro River, between Régua and Tua, taking in the Port wine country landscape between June and October. For 2016, the 1960’s diesel engine is slated to be replaced by a restored 1920s locomotive.

Branch lines make for great day trips. Sintra is just 48  minutes by rail from the Rossio Station in Lisbon, Cascais is just 46 minutes from Cais do Sodre Station. And Coimbra, Tomar and Evora are all 2 hours or less away from Lisbon by rail. From Porto, rail links you to Aveiro, Braga and Guimaraes. From Coimbra, CP has regular service to the beach city of Figueira da Foz.

The train stations are often worth the trip!

Portugal’s first rail line opened in 1857 between Lisbon and Carregado. By 1887, Lisbon was connected to Paris. Many train stations are decorated in azulejo tiles, or built with style and charm. In fact, Portugal has been included on some top train station lists recently.

Here are few that you might want to see:

Lisbon’s neo-Manueline style Rossio Station is right off the Rossio, and was designed by José Luís Monteiro. The 1887 façade features eight horseshoe shaped doors that mirror nine palatial windows with an ornate clock tower looming over the top.

The Lisbon Oriente Station soars behind the modern Nation’s Park, not far from the Lisbon Airport. It was designed for the 1998 World’s Fair by Santiago Calatrava – with soaring towers that mirror nature. Oriente is one of the world's busiest stations today, with more than 75 million passengers boarding trains and buses here each year.

Porto’s São Bento Station opened in 1916. Set in the center of the city, São Bento is famed for its azulejo panels. There are more than 20,000 tiles that are the work of Jorge Colaço, a Portuguese painter. The historic station links to several lines, as well as a commuter rail. It often hosts almost as many tourists as passengers.

In Pinhao Station, in the heart of wine country, the theme of the station is the Port. The tiles were designed by J. Oliveira, and were produced in 1937 in Aveiro. In the tiles, you can see the great Rabelo boats, the grape harvest, as well as the landscapes of the Douro River Valley.

Santarém Station, north of Lisbon, is served by the Northern Line. The busy station is situated between the Tejo River and the fortified city of Santarém on a hill. The station shows off one of the most beautiful works in azulejo tiles of any station in Portugal. There are two dozen panels on the platform showing landscapes of the Ribatejo as well as the conquest of Santarém from the Moors by King D. Afonso Henriques. The station dates from 1927 and the tiles are by J. Oliveira, painter of the tiles of Pinhão Station. The station also houses a small railway museum.

In Aveiro, North of Coimbra on the Northern Line, the station’s facade is completely decorated in azulejo tiles in blue and yellow tones. The station was built in the traditional style, inspired by the Casa Portuguesa.

The museum visits the history of Portuguese rail going back 150 years.

The collection has some 36,000 items from engines to tiles.

See the Royal Train or the Portuguese Presidential Train as well as many great trains that once rolled across Portugal.