Some of our favorite castles… in Portugal

In the middle of the historic walled city; surrounded by trees and a 15th century palace stands the castle that witnessed the birth of this nation. The castle of Guimarães is simple, yet a formidable site, it was here that D. Afonso Henriques was born in the 12th century to the Count Henrique and his wife D. Teresa. The future king was baptized in the Romanesque chapel of São Miguel outside the castle gate.

Today, the ruined palace of the first king, with its simple granite walls, remains. The pointed castellated walls and parapet, high keep and guard towers remain, a reminder to today’s Portuguese of the courage of their first king.

Writer José Francisco Trindade Coelho is tied to the rugged Northeast of Portugal where he was born more than 200 years ago. This Portuguese author from the Trás-os-Montes region was born in 1861 in the town of Mogadouro. The town first became part of the kingdom of Portugal in the thirteenth century. The land was then ceded to the Order of the Knights Templar, who founded a castle here, that still crowns the town. This time of year, the almond-trees are in blossom and the fields are covered with a blaze of white.  In 1891, Trindade Coelho wrote this of the Castle of Mogadouro, in “Tipos da Terra - Os Meus Amores,”

Up high, dominating the dark chimneys of the roof tops, the ancient castle,

Roman in origin, was saddening with its fallen defenses, and vast walls in ruin.

To its side rose stubbornly

in a primitive style.

that damned thing never got it right. 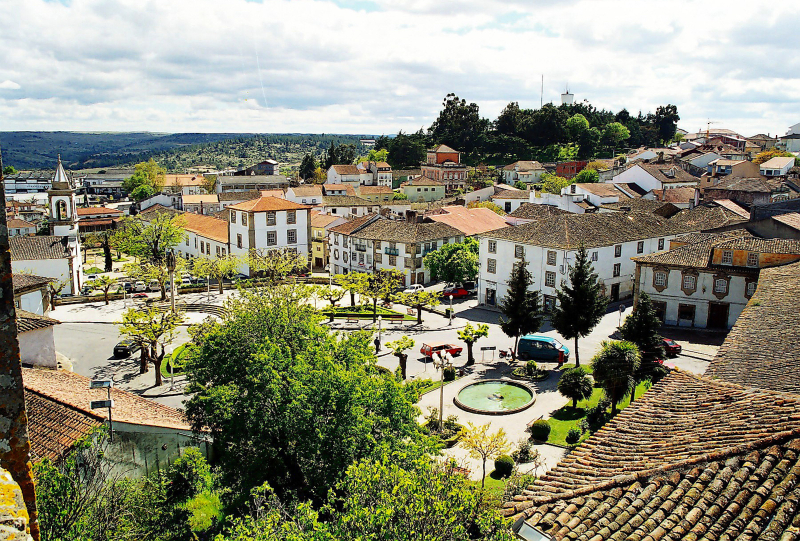 The Lost Valley of Arouce is about 2 hours north of Lisbon in the Centro de Portugal Region. Here you will find the ruins of a castle that once defended the village of Arouce.  The village is now overgrown with trees, its houses gone or mere remnants. The castle is now just a small keep, and a circular wall of brown slate tiles.  It sits on a forested hill, surrounded by steep mountains. According to legend, the castle was built by “King Arouce”- who fled to this hidden valley with his daughter when barbarians overran the Roman City of Conimbriga in the 4th century. Portugal later emerged as its own nation in the 12th century, and the town and castle of Arouce lost their importance. The valley fell silent and Arouce was gone by 1513, veiled in mystery and myth.  Arouce is outside the quaint town of Lousã and is just one of many tiny villages that dot the Serra da Lousã landscape.

To the Portuguese, this tiny town will always be associated with the great Álvaro Gonçalves Coutinho, a 15th century knight nicknamed “Magriço,” or “the thin one.”  This roaming knight was immortalized in the masterpiece of Portuguese literature “Os Lusiadas,” by Luis Vaz de Camões.

The castle of Penedono belonged to the Coutinhos, and is one of the most magnificent in all of Portugal.  Its reddish towers loom over the small town, rising to fantastic heights.  The castle dates to the 10th century, but the fanciful structure that dominates the town of Penadono today is mostly from the 15th century.  The ornate towers, mighty red walls and imposing location guard nothing but an empty space that once was the palace of the Coutinho family and an endless view.

“A castle with fives sides is not be found in Portugal,” says the old poem, “If not on the banks of the Côa, in the village of Sabugal.” And true to its word, the keep of the castle of Sabugal is pentagonal and it is quite a castle at that. As the first walls rose in the 12th century’s Ogival style, the small town became a battleground, first between a young Portugal and the Moorish armies, and then between Portugal and Castile. Legend has it that the kings of both nations met in the castle in 1224 to work out the disputed border. Almost a century later, the lands were still in dispute, leading King D. Dinis to expand the castle, adding an unprecedented five sided keep, a solid new ring of walls, and a subtle message to the Castilians: This was a Portuguese town. Sabugal retained its importance in 15th century when King D. Manuel I ordered it repaired, adding elegant balconies with murder holes, and cross-shaped archer’s loops. Today, the restored castle retains its ancient might with well preserved rings of circular, delicately castellated walls, and a five-sided keep that still proclaims: This is Portugal.

“Lovely to see” is what Belver means.  And, legend has it that King D. Sancho I asked the knights of St. John of the Hospital to build a castle on a hill overlooking the Tejo River. In 1194, the knights of St. John began to build their castle, which they defended until 1350, when the Order of Crato took on the task. The castle served as a base for attack to the south, while its high walls and impressive keep deterred Moorish assaults. Belver’s castle still dominates the highest hill on a green and yellow bank of the Tejo, with a small village in its lap. The fine walls, which are in a good state, circle the keep in the shape of a pear. The walls offer breathtaking views of the Tejo, and a sense as to how Belver got its name.

Pinhel is a walled interior town of 9,000 and has some great architecture and great wine.  The name Pinhel comes from the great abundance of pines existing in the area. Pinero’s.

The proximity of Pinhel to Spain means that this well-fortified Pinhel Castleis a fine example of Portugal's unique Manueline architecture.

Surrounded by walls and rivers, and lying at the heart of a system of fortifications that included the castles of Trancoso, Marialva and Castelo Mendo, Pinhel was one of the most advanced strongholds in this part of Portugal until the 13th century.