Every language has its funny and colorful phrases. Portuguese, one of the oldest still spoken languages in Europe, has some real obscure and hard to understand sayings. Here are just a few of our favorites:

“Só para o inglês ver” (For the English to see)

Means doing something else done just to keep up appearances, without actually anything.

Back in the 19th century English occupation of Portugal after the Napoleonic Wars, this saying seems to imply appearing to be keeping busy to placate the English. 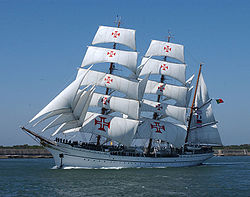 Period expression that refers to a contemplative attitude of people doing nothing but waiting for something to happen. Daydreaming.

The Portuguese who watched for ship hoping that one day King D. Sebastião, who disappeared at the disastrous battle of Alcácer-Quibir in Morocco in 1578, would return. Dom Sebastião’s return to Portugal would restore the nation to its glory. Still waiting....

“Portuguesismo da Alfama” (As Portuguese as the Alfama)

Not very Portuguese at all.

Bit of a joke, as while the Alfama is typical of Lisbon, it is Moorish in its founding, pre-dating Portugal.

Go away, as said to when someone is bothering you.

The poet Camões being dead — this means go upset "someone else” like Camões, as he is dead and would have the patience to put up with someone so annoying. Vai pentear macacos!Or "go comb monkeys" is an alternative,

“Ter pulga atrás da orelha” (Have a flea behind the ear)

Something is off… Basically to be suspicious or bothered, as you would be with a flea behind your ear

Wake up on the wrong side of the bed, in a bad mood, or with cold feet. Bad start to the day

Something that is taking a long time, forever.

It refers to the construction of the church of Santa Engrácia, now called “National Pantheon” in Lisbon. Work began in 1568 and with setbacks it took almost 400 years to complete. It was only dedicated as the National Pantheon in 1966.

The  immediate need to replace one ruler with another, without a long period of power vacancy.

You have a lot of nerve, kind of like tin plated.

Portugal is set on the  sea with a mild climate, but easterly winds from Spain are often unpleasant.

As for “neither good marriage” is said, it is a historical reference to some unsuccessful royal marriages between Spain and Portugal, which have translated into compromising political independence.