Island hopping by boat in the Azores Triangle

About midway between the east coast of the United States and mainland Portugal sits the Azores, a collection of nine islands scattered over several hundred nautical miles. The closest point to Europe from the United States, the Azores were once the one-and-only stopping-off point for ocean voyagers traveling between the two continents.  Today, the Azores are an autonomous region of Portugal, even though they are more than 800 miles west of Portugal’s mainland. A direct flight from Boston to the Azores takes about four hourS.

Because these once uninhabited, remote islands were settled sporadically over a span of two centuries, their culture, dialect, cuisine and traditions vary considerably from island to island. But, only three of these islands are easily hopped to by boat- a regular ferry connects the lower part of the central group – where Pico and Faial are just 25 minutes apart, and Sao Jorge is 45 minutes by boar from Pico.

São Jorge is a central Azorean island, encompassing 92 square miles.  A central peak, Esperança Peak, rises to 3,497 feet. The whole island looks a bit like an aircraft carrier, as the long and narrow central plateau of the island soars above the sea. The central plain of the island is relatively flat, making it a perfect walking destination with quiet roads, open fields and an abundance of trails to choose from.

São Jorge produces everything from wine to cereals, but it is best known for its cheese. The dairy cows dotting the open green pastures are evidence of this important industry. They far out-number the 8,000 residents and are often seen being herding along the island’s red dirt roads. There are several cheese factories operating on the island, giving visitors the opportunity to learn the finer points of cheese production during an up close and personal tour that shows you exactly how cheese is made.

The two main towns, Velas (where the ferry docks) and Calheta, are both on the island's warm, Southern coast. Visitors can find historic churches and palaces in each town, with both surrounded by manor homes. Most other towns on the island are found along the cliffs at the coast rather than inland in an effort to leave room for the grazing and growing that takes place in the island's interior. São Jorge also boasts a hotel school that offers both lodging and traditional cuisine prepared by young chefs-in-training.

Pico, which means "Peak" in Portuguese, is the aptly named island that is the furthest southwest of the Azores Islands. It sports a giant peak that often rises above the cloud cover, marking the first glimpse an air traveler might have of the Azores. Visitors can climb the peak at Escalada ao Pico. The climb up to the 7,700-foot summit is well worth the 3-hour trip!

Pico was settled in 1460, with most residents rooting down near Lajes, the island's first town. Other villages are mostly located along Pico’s coastline. Homes are often made of black stone, a trademark piece of history from past volcanoes. Those volcanoes are also responsible for the islands' wild landscape, where the old lava flows are frozen in time in areas called mistérios.

Pico is known for its excellent wine, a unique vintage that carries just a hint of lava. In the 19thcentury, even the czars of Russia sent ships to bring back Pico’s wines. All along the coast, two-foot walls shield the vineyards producing the wine’s grapes from the sea and the elements. And if that’s not enough to impress you, this wine-producing region has been given for recognition as an UNESCO World Heritage Site. There are charming seaside towns here to carved between black rocks and the sea. Inland there is a great series of cave that can be explored with a guide, lit by flashlight and nothing more.

But it’s the sea-faring culture – first whaling and now tuna –that clearly defines Pico. The island once had a thriving whaling trade recalled in two local museums. In Lajes, an excellent museum traces how the people of Pico took to the seas in tiny boats to land huge whales. In São Roque, a former whale processing plant shows how industrial whaling happened from beginning to end. Today, tuna is the fish of choice for trade and export.

Today, Faial Island encompasses some 67 square miles, but back in 1957 it was a mile less. The lava from a 1957 volcanic eruption eventually added to the land mass and made the island’s western end look a lot like the surface of the moon. Now a regional park, the landscape is one of reddish and black dust rock and the charred remains of a lighthouse. Mount Gordo still stands at the center of the island.

Faial (meaning “beech wood”) was named for once abundant wax myrtle, which the island’s discoverers thought were beech trees.

Ships have stopped in Horta – the main ferry port of Faial –  on their way between the New and Old Worlds for centuries. The seafarers left their mark by creating a giant collage of inscriptions and colorful paintings on the walls and sidewalks of the marina’s jetty. Legend has it that bad luck will follow any sailor who doesn’t leave a painting or inscription behind.

Yachts still regularly pull into Faial. More than 1,000 yachts visit the port with more than 4,400 crewmembers aboard each year, making it the busiest marina in Portugal. The port has about 250 slips.

Horta’s internationally flavored waterfront offers shops that specialize in outfitting the ships that pass through. The city is full of modern cafes, bars and a few nightclubs, while the architecture is largely from the 19th century. 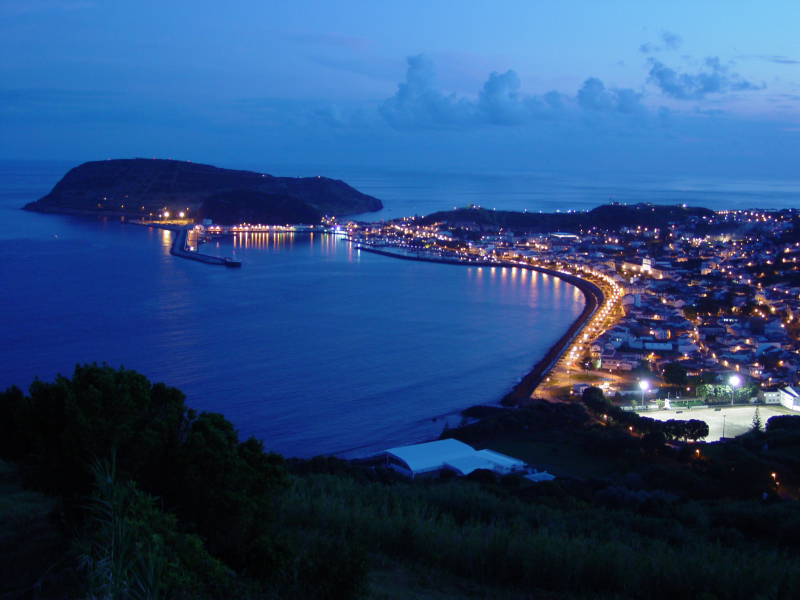 With a local fishing fleet just offshore and cattle grazing on the island, the local cuisine focuses on fresh fish and beef. Most food served in restaurants is locally grown or produced, including a soft, velvety Ilha Azul cheese.

Horta’s waterfront watering hole, Peter Café Sport, has served sailors since 1918 and is rated one of the best bars in the world by Newsweek. The café walls are covered with sailing banners and notes from ships seeking crewmembers. The café has an on-site museum with an extensive scrimshaw collection, and is also a place where visitors can catch a whale-watching tour, spotted by former whalers, or an adventure bicycling tour.

From the Espalamaca vista, tourists can admire Horta and look down into the 300-foot crater of the extinct volcano. Faial is also a great base from which to explore Pico Island, just 30 minutes away by ferry, and São Jorge, about an hour-and-a-half long trip.

The island also has a new airport. Flights offer connecting service to Boston, Providence and Oakland, as well as direct service to Lisbon and most of the other Azores islands.