Come for the harvest, or visit Portugal's vineyards anytime

Fall in Portugal brings a buzz of activity to the various wine regions across the country, from picking and processing the grapes to celebrating the harvest with food, song and traditional festivals. 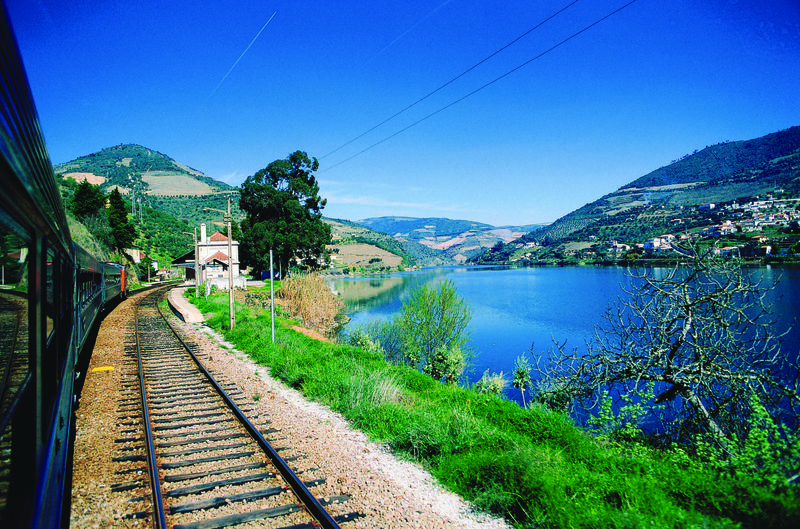 From the plains of the Alentejo towards the south, to the more central-northern valleys of the Dão and Douro Rivers, each harvest and the local celebration that goes with it has a unique flavor.

During September and October, visitors can witness harvest and wine making techniques old and new at vineyards across the country. They can tour the vineyards and even help harvest or crush the grapes in some cases.  Some wine estates, large and small, offer visitors a chance to stay onsite, with perhaps a wine tasting or a complete wine pairing dinner to end the day.

Throughout the country, vineyards sit among stunning landscapes and are easily toured by car or on bicycle.  In the Minho region, the grapes used for the Vinho Verde wines grow on trellises.  The vineyards of the Douro region run in a series of tiered, steep terraces.  Throughout the September harvest, men can be seen walking the vineyards carrying baskets of grapes, while the women are helping and singing traditional songs as they work or celebrate.

Many of the wine routes in the middle of the country run through small towns, each brimming with history.  Along the River Tejo, the wine region is full of fertile fields that get irrigated when the river bursts its banks.

Life is good, but wine is better.

The wines of the Coastal Region:

Explore the Atlantic wine regions that are characterized by the ocean beaches, including Esposende, Ofir and Fão. Much of this part of the country has also been classified as a protected natural area. The North Coast Natural Park runs for nearly 18 kilometers between the Cávado River estuary and the village of Apúlia, characterized by white sand dunes. The dunes act as a natural barrier against the sea winds and prevent the ocean from encroaching upon the nearby farmland. Hikers can follow the Natural Park’s trail along the banks of the Cávado River, which is frequented by such migratory birds as capped herons, terns, mallards and herring gulls. Farmland in this area has been fertilized by “sargasso”, a seaweed that washes up on the beaches. In fact, harvesting the sargasso has been a traditional occupation here for centuries.

TRAVEL HIGHLIGHTS IN THE AZORES

The Azores are known for being unspoiled and, largely, undiscovered by tourists. The 9 islands that make up the lengthy archipelago have ranked second in a National Geographic Center for Sustainable Destinations survey of favorable island destinations. They were noted for their mountains, lush greenery and the sophistication of the residents, many of whom have lived elsewhere in the world. Dolphin and whale watching are popular activities here for visitors, as well as hiking through the lush growth of hydrangeas and many other exotic species that have been transplanted here from all over the world.  On the island of Terceira, the town of Angra do Heroísmo has been awarded World Heritage status by UNESCO, thanks to its Renaissance town center.

TRAVEL HIGHLIGHTS IN THE MADEIRA ISLANDS

Rising from the sea 400 miles off the coast of North Africa, Madeira has a tropical climate with lush vegetation and some of the highest sea cliffs in the world. The inhabited islands of this archipelago are Porto Santo and Madeira. The islands are autonomous, but belong to Portugal. Half of Madeira’s population lives in the capital city of Funchal.  The harbor at Funchal is still an important stopover point for cruises between Europe and the Caribbean. The Laurisilva Forest, in the Madeira Natural Park, is the largest evergreen forest in the world and is now classified as a World Heritage site. The islands were influenced by Great Britain and Flanders in the past.  With 500 years of history, these islands offer intriguing architecture, museums, churches, palaces and manor houses for visitors to explore.

TRAVEL HIGHLIGHTS IN THE MOUNTAIN REGION

This region includes numerous castles, monasteries and churches that characterize the long history of this area. The region is filled with the history of fierce battles and stories of Portugal’s roots before it became a nation. Its natural resources are also legendary, with glacial lakes and inviting spring waters, making it popular for outdoor sports. The Serra da Estrela Natural Park is a favorite destination for travelers. Also in Central Portugal is the city of Coimbra, home of Portugal’s oldest university and its renown baroque library.

EXPLORING THE PLAINS REGION OF PORTUGAL

The Algarve is becoming a playground for the visitors who come to Portugal from all over the world. Its year-round warm climate attracts golfers and major golf tournaments, as well as those who love outdoor sports and adventure. The region is full of nature preserves and parks, cork forests and olives groves and, in the Alentejo area, wide open plains and wheat fields.  The country’s long history manifests itself in this region with castles and fortresses and Roman ruins in ancient cities like Evora.