Home Archives Subscribe Meet the team
Portugal in a glass
George Clooney to build house on the Alentejo coast,

From Cacela to Mertóla: Two of the castles in the Portuguese Flag

According to legend The seven castles on the shield of Portugal are traditionally considered a symbol of the Portuguese victories over the Moors, under King Afonso III who is said to have captured seven enemy fortresses in the course of his conquest of the Algarve in 1249.The first was Mértola, the last Cacela.

Called the last unspoiled fishing villages in the Algarve, Cacela Velha is hidden in the open and lovely beaches of the Parque Natural da Ria Formosa. One can still see the fort, that guard the active fishing harbor.

The tiny village is quite picturesque perched above the sea and sandbars speak of an age gone by. The local church, the fortress walls and the traditional style of the houses give the visitor a flavor or what life looked like in Algarve in days past.

From Cacela Velha you have an unprecedented view of the lagoon of the "Parque Natural da Ria Formosa". This park consists of 60 km of coastline and was founded in 1987 with the aim to protect the ecosystem of this area. On the sheltered beach you'll find the odd traditional little fishing boat. The lagoon with its marshes, saltpans, islands and narrows are protected against the open sea by a chain of islands. The water of the narrows is warm and extremely nutritious and therefore rich in shellfish such as oysters. The fish and the warm climate attract a wide variety of wild birds.

In the region, the Parque Natural da Ria Formosa is considered the most important sanctuary of wildlife in the Algarve. Its lagoons, marshes, channels and islets are abundant in shellfish such as cockles, clams and oysters and shelter, amongst other species, a variety of birds such as the cattle egret, the white stork, the purple gallinule, the red-crested pochard, etc. This natural reserve stretches along 60 kilometers (40 miles) and its rich ecosystem is ideal for the development of varied fauna and flora

Head Northeast to the nature reserve "Sapal de Castro Marim", a wet area with marshes and extended saltpans, many of which were already in use before Roman times. Nowadays they are protected as a nature reserve. Tidecreeks offer an important refuge and breeding ground for many birds such as the stork and the black-winged stilt. There are also herons, searching for food at the borders of the saltpans and now and then a timid flamingo can be spotted. Continue to Alcoutim along the Guadiana river and enjoy breathtaking landscapes. 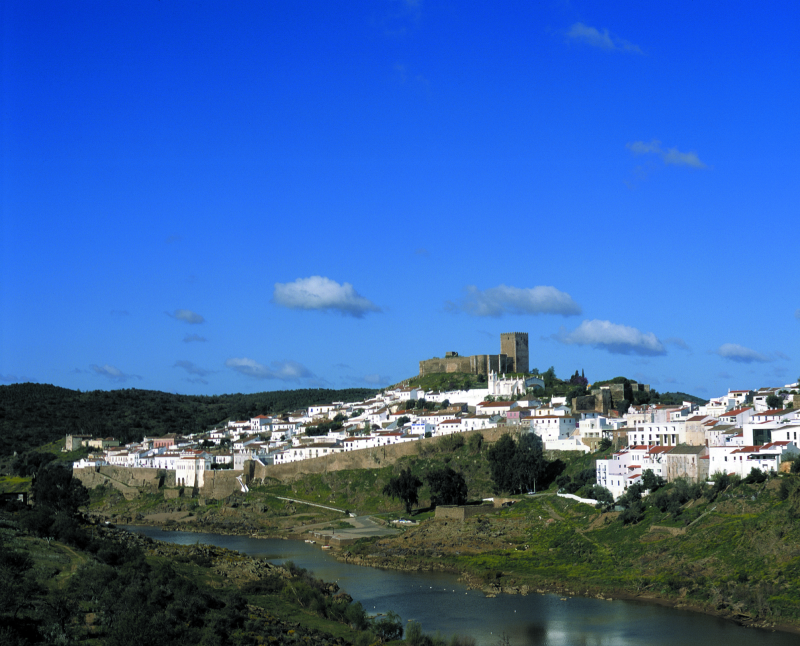 Charming Alcoutim is at 15 kilometers from the border with the Alentejo, along the Guadiana river. This town has a timeless quality about it.

The next place you come to  is Mertóla. It’s a museum town of sorts monuments date back to the roots of Roman and Moorish culture. Martial extends over the two banks of the river Guadiana and covers an area of more than 1,200 square kilometers.  Before the Roman period, Martial was already a significant commercial axis, because it was the most Northern inland port on the river. It is here that people arrived and settled and that goods that came from the most remote regions of the ancient Mediterranean world circulated.  It is also here that the river and the roads which brought the bread and the olive oil from the clayey soil of Beja and minerals of Aljustrel and Sao Domingos crossed. The combination of all these factors made Martial an historically important town. The monuments and landmarks of this past are scattered over the city, still surrounded by the old wall, a kilometer long.

Sauntering through the narrow streets you will feel as though you are in ancient times and on every street corner you can feel the history of the Phoenicians and the Moors. Recently, an area of about 600 km2 around Mertóla was declared natural park. Here you can find the black stork and the blue magpie. We have set out a cycling tour around Mertóla for you.

The castle of Mértola is located on the highest point of the village. Even though the castle is of Muslim origin, the current building dates from a reconstruction carried out by the knights of the Order of Santiago after the village was taken by the Christians. The most notable feature of the castle is its 30 meter-high keep tower, finished around 1292, which has an inner hall covered with Gothic vaulting. The defences include a city wall, which still encircles the village.

Main Church: The most important monument of Mértola is its main church (the matriz), originally a mosque built between the 12th and 13th centuries. After the Christian conquest of the town, in 1238, the mosque was turned into a church, but its architectonic structure was left unaltered. In the 16th century the church was partially remodeled, gaining Manueline vaulting with a new roof and a new main portal in Renaissance style. Nevertheless, the inner arrangement of the naves of the church, with four naves and several columns, strongly resembles that of the original mosque, and the interior of the church still has the mihrab, the decorated niche that indicates the direction of the Mecca. Outside, the church has four portals with horseshoe arches, typical of Islamic architecture.